Skip to content
How To Grow Your Agency (with Chris Do)

How To Grow Your Agency (with Chris Do)

Chris Do shares his insights about how to grow your creative agency.

Chris Do  is an Emmy award winning designer, director, CEO, and chief strategist of Blind.

He’s the founder of the future, an online education platform with a mission of teaching 1 billion people, how to make a doing what they love.

So yeah, when it comes to creativity and the business of design Chris Do is a real life master.

Chris opened up about his early days in the agency world, scraping through contacts to find clients and his top three things that he would do if he had to go back and start at the bottom.

So if you’re a freelancer or an agency owner, you’re not going to want to miss the value bombs that Chris shares on this article. 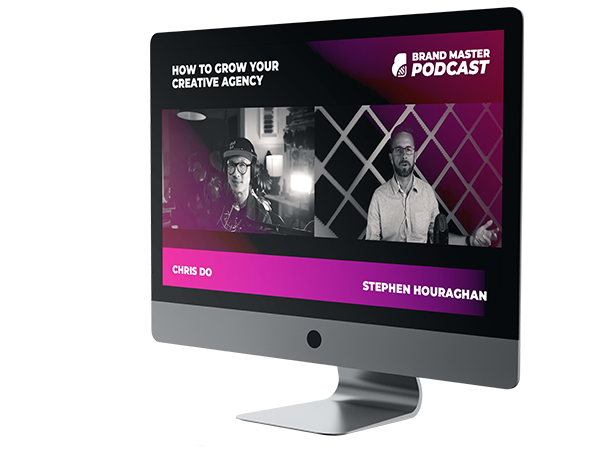 Chris Do shares his insights about how to grow your creative agency.

Chris Do  is an Emmy award winning designer, director, CEO, and chief strategist of Blind.

He’s the founder of the future, an online education platform with a mission of teaching 1 billion people, how to make a doing what they love.

So yeah, when it comes to creativity and the business of design Chris Do is a real life master.

Chris opened up about his early days in the agency world, scraping through contacts to find clients and his top three things that he would do if he had to go back and start at the bottom.

So if you’re a freelancer or an agency owner, you’re not going to want to miss the value bombs that Chris shares on this article.

Contents Show Contents
How To Grow Your Agency (with Chris Do)
How To Grow Your Agency (with Chris Do)
Chris Do’s Journey
Steep Learning Curve
Get The FREE Framework Template PDF Now!
How To Leverage Your Network To Find New Clients
How To Grow Your Team
How To Delegate So You Can Grow
Referral Strategy vs Marketing Strategy
How To Scale Systems & Processes
Want Actionable Brand Strategy Tips & Techniques?
How To Scale Your Marketing
The Road To Brand Success Is A Long Road
Referrals or Partnerships
If You Had To Start Again
Wanna Learn More About Brand Strategy?
Brand Master Secrets

How To Grow Your Agency (with Chris Do)

Chris is kind of from that moment, from the moment you kind of started to realize that you had a talent and you were coming out of art school,

To the point that you said to yourself. Okay, I think I’m going to do something on my own here.

I’m going to start my own business.

Can you tell us a little bit about the journey from there to the moment that you decided to start your own business?

It was just like, how do you make an extra buck?

Because I want to have financial freedom, even as a kid, I was like finding something to sell.

I’ve always desired to be able to be self-directed, but I didn’t know it was going to happen in the way that it happened.

I think it might be worthwhile to kind of spend a moment to share, kind of the time and place in which I’m operating in so that people have some context.

While I was still finishing up with school, I had an opportunity to work on an ad agency and spent three and a half months there.

They offered me a job and I’m still kind of like a full-time freelancer, they took really good care of me, they put me up in a corporate apartment, etc…

I got somewhere along the way and thought to myself that

this is not the right place for me. I’m a designer. I want to design things.

Ultimately I quit and finished school. I hadn’t prepared for any of the on-campus interviews,

I miss all of the orientation to senior portfolio thing. I missed every single part. So the only thing I can think of is to find another job.

So I go and work for Epitaph records. , mostly because one person, I knew from school was the creative director. His name is Fred Hidalgo.

I got that job a month and a half in. He gets fired and I’m like, I gotta get outta here. The only reason why I’m here was to work underneath him and to learn from him.

So I quit and I freelance.

So now I’m starting to enter the real job market and I’m starting to figure out I need to become some kind of entity because I’ve tried, corporate America in advertising,

I’ve tried the punk rock music scene, and neither of those two things worked for me for different reasons.

And so I feel like now the only way forward is to figure out how to start my own company.

I’m plotting in my mind when, at what point will I know that I’m ready, coincidentally. And this is a matter of a few months here.

Like three months after graduating from school. My uncle calls me up, he says, I know since a kid you’ve always wanted to create your own company.

I know you just finished school. Do you want to start a business? Because I have a business partner who wants to invest in a design company. It’s like, things are just falling into my lap.

So he calls me up and I’m like, yeah. So he says, put together a business plan. Didn’t know what one was, meet us at the Western bonded venture in downtown Los Angeles.

This is in 1995 and I meet with him and his business partner. He’s a real estate developer. He builds hotels. So this is not just like some little thing.

I remember staying up for nights prior to presenting this business plan with three five-year projections, I called up an investment banker friend. I guess my friend’s father, who was in that space, guided me through the process. I sat down and met with him. He does what most business people do.

He flips through it just to make sure you’ve done something. He puts it away and he goes, let’s do business.

He reaches in his coat pocket. He pulls out a checkbook on the spot while we’re still having dinner.

We don’t even have a deal. Stephen, I didn’t know what I was getting into. This is the first time, literally the first time I’ve met this person and they’re already writing me a check and I’m feeling like I have a rabbit’s foot stuck up on butter or something. Cause things just seem.

I was going to ask a question, later on, was there ever part of the steep learning curve where you felt out of your depth, but I think it’s, it’s better to bring that question forward now.

What were you going through when you were preparing for all of this?

I think people who are really successful are usually one of two things.

One is they’re really talented and they know what they’re doing.

And two they’re just dumb enough not to think they can fail.

I fit into the latter of the two categories, so I’m aware, but I’m not so aware. I have belief in. It doesn’t just happen for everybody at school, you get some, some person to cut you a check. And now I think about it. I think it was $5,000.

It was a lot of money back then for me, I was like, holy cow, who does this? So I’m not afraid of starting a business.

I think and falsely so that talents will take me there. I mean, so far talents have opened all kinds of doors for me. So why would I believe otherwise? Right. Something just pings me.

I’m just thinking, look, I’m not even out of school. I got a job in advertising. I finished school. I don’t prepare for anything. I got another job in the entertainment space.

I’m freelancing around town. And before I know a

business opportunity presents itself. So I’m not so worried.

I have this money and that’s enough. I basically put in my notice, I  finished up my booking and then I started this company and I’m in business for myself.

I go to the bank, I do a DBA doing business as a file, like a, the city tax and license and all that kind of stuff. I’m in business, except for one huge problem.

Where do you go from there?

Where do you know where to spend your money?

Where do you know where to invest your time?

How do you go out and get that first client?

Because you don’t know any of this, how did you figure all that out?

Yeah. So the reason why I gave that context for you is that all of my first clients came from people I just recently worked with.

So when you had the ad agency sent me work. The people I just graduated with, of them, got jobs eventually and found ways to bring back work to me.

The music label company, some of the people who work there hired me to do some independent contracting freelance work and when I was freelancing around town, they still called me and now it was under my terms.

So this was a very different shift from being a freelancer who’s trading my time for money to being an independent contractor.

I was just working remotely and of course, I’m an enterprising young person at that point.

So as soon as I get work, I’m calling up friends. I need help because I’m getting more leads, more opportunities to work than I can physically do instantly.

Right. And here’s the tip I want to give to anybody listening to this

when you work somewhere, whether it’s full-time freelance, whatever it is that you’re doing as an independent contractor and make an impression on people so that they remember.

The unforgettable in that way. And that will be your number one source for leads.

I have found this through my own experience as well, but the more I talk with very successful people the more commonalities appear, one that comes to mind is Michael Janda, that he got the likes of, Google, Nintendo you know, big, big companies because.

He’s one of the nicest guys you’ll ever meet and he lives by the philosophy, be nice to people, and that comes back to you.

Certainly as you go throughout your career, being nice to people, helping people being a giver and not a taker that all comes back and it’s the whole karma thing, but really starting off at the beginning and turn around.

Download this FREE BluePrint to get the EXACT FRAMEWORK used by TOP AGENCIES to build brand strategies for their clients.

Avoid the mistakes that 95% of amateur brand-builders make and create strategic brands like a PRO.